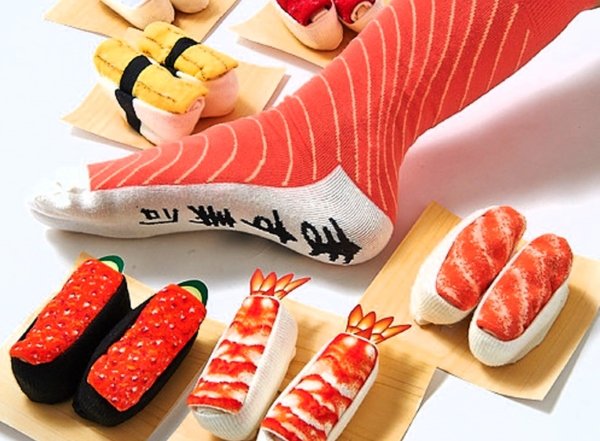 Sushi Socks
Looks like perfectly formed sushi when they're rolled up.
£7.99

Looks like sushi, but  they’re actually adorable socks. Collect them all to make your sock drawer look like a bento box!

“Sushi, anyone?”  Or is it? It might look like sushi, but they’re actually SUSHI SOCKS.  Be very careful if you pick one up when visiting a friend, because all is not as it seems.

Sushi Socks are made from soft poly-cotton (rather than sticky rice and raw fish) and when you carefully roll them up they actually look like sushi presented on a plate ready to eat. The best part of it is that there are actually seven different varieties:

The sushi effect comes from the way the patterns are organised when folded.  These socks have the designs knitted into them (rather than being printed) and that means that the colours last so much longer making them really good value too.

Now we are sure you don’t have niffy feet, but if you do, nobody will even realise if you carefully roll them up to appear like sushi as soon as you take them off.  Be warned there is an art to it, so watch carefully the first time you undo them.

Chopsticks are not included, (not that you need them), but if you have some lying around they add to the deception.  And if you have all seven varieties then then get a cork mat will and make that deception complete.

£14.99
Added to wishlistRemoved from wishlist 3

£78.75
Added to wishlistRemoved from wishlist 1