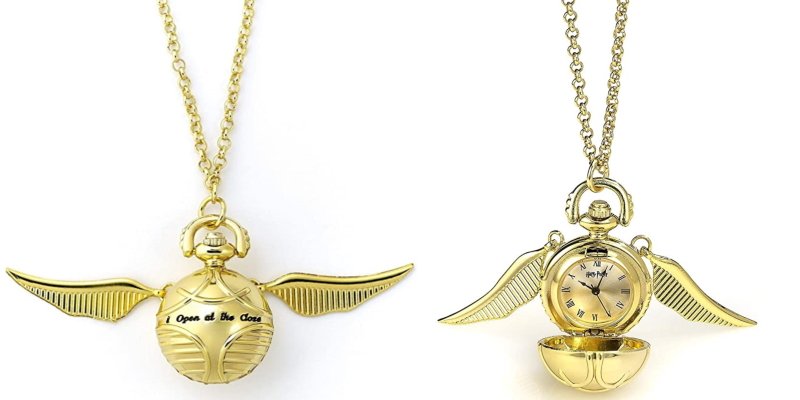 The Golden Snitch is legendarily elusive, testing the skills and nerves of even the most accomplished individuals of the wizarding world. Turn yourself into one of the magical elite by wearing that incredibly famous winged ball around your very own esteemed neck.

Any witch, wizard, or Muggle who is worth their salt (or should that be potion?) knows that there is only one sport in this world that is worthy of life’s undivided attention and devotion. Yes, we’re talking about that glorious, fast-paced, heart-pounding, broom-racing, ball-snatching adrenaline-rush of a game that is Quidditch!

And a Quidditch victory is all the more incredible when you really stop and consider just how difficult it is to grab that ever-elusive Golden Snitch while whizzing about in the air, perched on a spindly stick, and with sneaky opponents swooping around like incredibly annoying bats. No wonder, then, that the Golden Snitch is such a highly-prized item: it is the mark of a truly astounding sportsman and magician worthy of carrying the honour of a whole House on their shoulders.

The fantastic news is that whether you are a fully-fledged Quidditch star or merely an obsessive Muggle still hoping to one day get that coveted Hogwarts invitation letter, that mesmerising winged ball can be yours to keep, right here and now.

And just to make sure it doesn’t ever escape before you have the chance to show it off before the envious and idolising eyes of your fellow Quidditch enthusiasts, this beautiful Golden Snitch comes securely suspended from a silver-coloured metal chain.

£14.99
Added to wishlistRemoved from wishlist 2