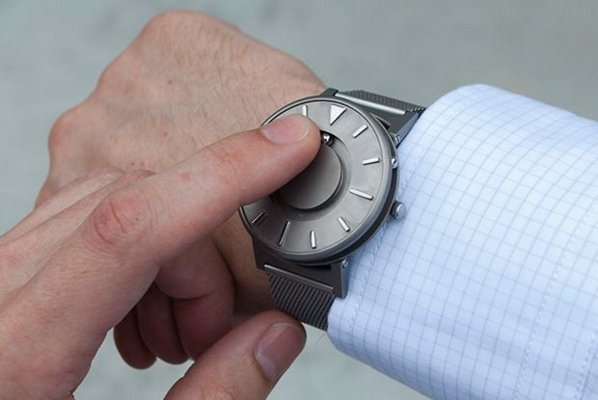 Bradley Mesh Silver Watch
Raised hour markers on this watch allow you to feel the time by touch.
£234.00
CHECK IT OUT!

Tell the time by feeling your watch.

In August 2013 the croudfunding campaign for a revolutionary watch, created with input and feedback from visually impaired, was successfully completed.  The idea behind the design was to provide the blind and visually impaired with a watch that could be read simply by feeling it. Sure, there are plenty of watches out there designed for visually impaired people, but these will shout the time out at you – not great if you’re in a noisy place, or even if you’re subtly trying to figure out what time it is.

The result of the concept of the Tactile Timepiece is an incredibly slick design where fashion meets function. It has even won the Design Museum’s Design of the Year award! Instead of using traditional watch hands, time is indicated on the watchface by two ballbearings.

One of these rotates around the front of the watch, and indicates minutes. The second ballbearing is located around the edge, and tells the user the hour of the day. To tell time, all you need to do is run your finger on each ball – ridges around the clock face help indicate the hours. Or, if you’re lucky enough to have your sight, you could also simply look at the watch to read it.

£14.99
Added to wishlistRemoved from wishlist 2

Build Your Own Computer Kit