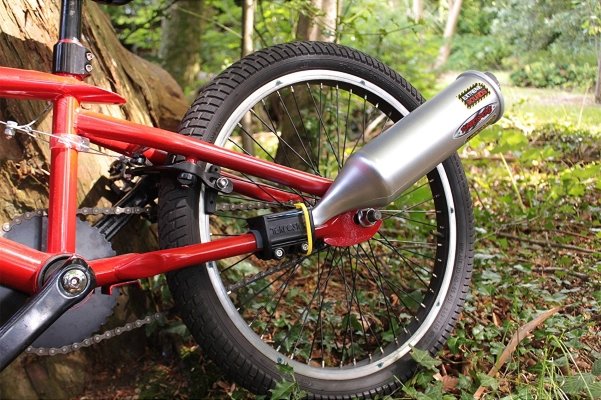 Thanks to this marvelous piece of engineering, you can now make your own, otherwise ordinary bike sound awesome.

The Boy Racer Bicycle Exhaust exhaust perfects the age-old practice of sticking cards in your spokes to make noise. Ridiculously easy to set up, it not only  looks great, but also gives the option of one of three different sounds – Dirt Bike, Muscle Bike, or a mix of both for those who can’t decide.

Not only does this make the ideal present for a wannabe boy racer, it can also be used as a great form of revenge. You know those toys that parents hate? Well this can easily be one of those – be the ‘cool’ aunt or uncle and give this present to drive their parents mad!

This little gimmick attaches to the kid’s bike to produce loud, persistent, migraine producing sounds. If your annoying friend  is also a helicopter parent, this will work especially well. Unable to say no to their precious little darlings, parents will be forced to sit for hours at skate parks while Junior attempts to break as many bones as possible, while emitting a constant stream of irritating noises, punctuated by howls of ‘LOOKATMEEEEE!’ All you need to do now is sit back, texting your friends occasional pictures of yourself partying in Paris, getting that promotion, or dating really attractive people.

Brand New The Bicycle Exhaust System Turn Your Bike Into A MotorBike
£14.55
CHECK IT OUT

Amazon.co.uk
2X Turbospoke - The Bicycle Exhaust system
CHECK IT OUT

Amazon.co.uk
MOTOCARDS
CHECK IT OUT

£14.99
Added to wishlistRemoved from wishlist 0