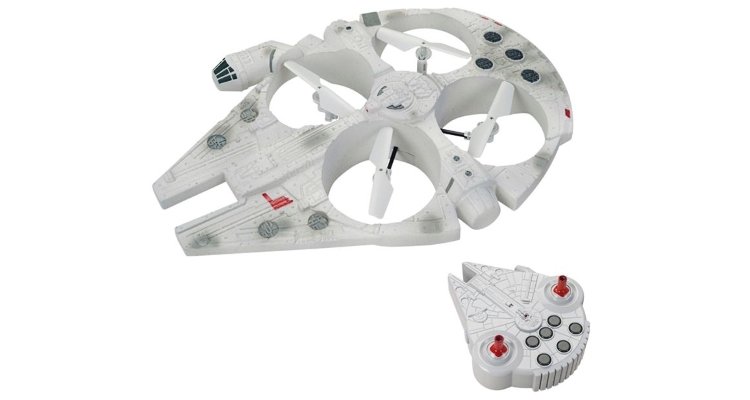 “You’ve never heard of the Millennium Falcon?… It’s the ship that made the Kessel run in less than 12 parsecs.” – Han Solo

First appearing in Episode IV (A New Hope), and subsequently appearing in V (The Empire Strikes Back, VI (Return of the Jedi) and VII (The Force Awakens), the Millennium Falcon is a nimble yet powerful ship piloted by loveable duo, Han Solo and his sidekick, Chewbacca.

From shifting into light-speed and racing away from Imperial Fighters, to maneuvering through asteroid fields to throw bounty hunter, Boba Fett off its tail, both lovers and haters of the Star Wars saga will agree that the Millennium Falcon is one of the coolest most exciting spaceships ever to grace our screens.

Now you can own your very own Remote Controlled Millennium Falcon, and re-enact all of your favorite Star Wars scenes using a nifty remote control, controlling it for a range of up to 200 feet! A combination of lights and sounds emitted from the ship will make this fictional machine more realistic than ever before!

Switch places with Han Solo and aid the rebels in an attempt to bring down the empire by taking control of one of the most iconic spaceships in TV history, the power of the force is in your hands… literally!

£5.99
Added to wishlistRemoved from wishlist 0

£9.99
Added to wishlistRemoved from wishlist 0

Glow In The Dark Toilet Paper

Microwave Cake in a Mug