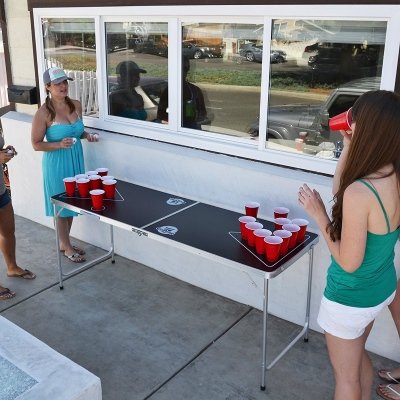 Going to University is such an important time in a young person’s life. Striding the halls of education with one’s fellow scholars, learning new and exciting skills at the feet of master lecturers, staying up all night debating the latest philosophical and scientific theorems. Nah, who am I kidding? It’s all about beer pong! 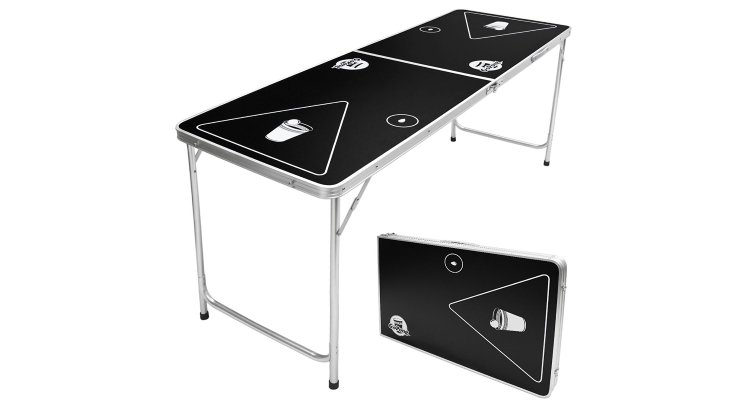 Ah, Beer Pong, that age old game of flirtation and initiation practiced between fraternities and sororities since the dawn of time. Two teams each setting up a triangle of red plastic cups, and attempting to bounce a ping pong ball into the opposing team’s cup, thereby forcing said team to ‘Chug, Chug, Chug,’ until as many team members as possible are inebriated and lying in a moaning heap, upon which the victors standing, singing sports-related anthems of triumph.

Ever a controversial game, Beer Pong has many rules, as well as being subject to local rules, house rules, and as much blatant cheating as possible. The revolutionary new Beer Pong Table aims to level the playing field, providing designated and mathematically precise layouts for the cups, evenly marked playing lines providing the correct demarcations for the bouncing of the ping-pong ball, and  including such handy gadgets as the Beer Pong International Association-approved bottle opener set into the side of the table.

Beer Pong is also a fantastic game for Stag Nights, Grand Final Sports Match Parties, and makes a great gift for anyone reaching legal drinking age. Pick up a Beer Pong Table today, and end those pointless arguments about whose cups are too far apart, or whose arms aren’t behind the table. Take your Beer Pong seriously, and get a real Beer Pong Table.

£5.99
Added to wishlistRemoved from wishlist 0