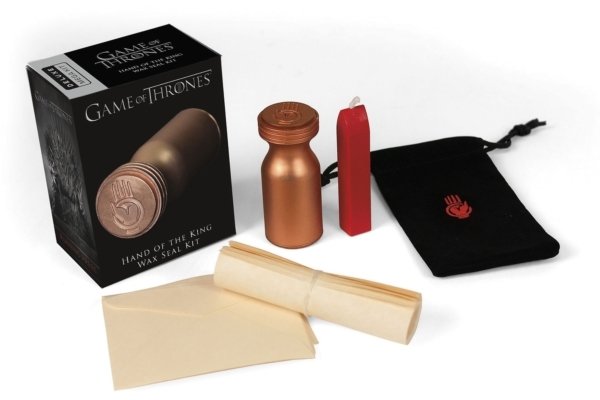 Game of Thrones: Hand of the King Wax Seal Kit

The King’s Hand is the second most powerful man in Westeros. Often the real power behind the throne as the only person able to actually hold things together, this position changes hands even more often than the king’s. In times where a powerful king sits on the Iron Throne, the Hand’s role is somewhat reduced to more of a supporting act – often cleaning up after the King. Ser Jamie once famously commented that “The King shits, and the Hand wipes.”

Despite Jamie’s opinions, the King’s Hand does hold a significant amount of power: the Hand is the highest ranking member of the Small Council, and chairs the meetings in the absence of the King. In these times, the seal is an important tool, as it guarantees the authenticity of any letter sent from from the Tower of the Hand. So follow in the footsteps of former Hands Jon Arryn, Ned Stark, Tyrion, and Tywin Lannister and many more as you stamp your authority on the messages you send to your subjects.

If you want to be seen as the King’s Hand when you’re out and about, you’ll need the official brooch to pin on your clothing: