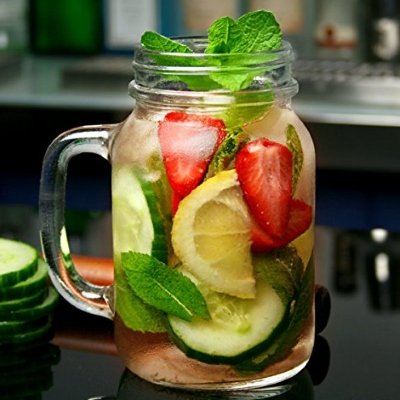 Be the redneck you always wanted to be.

During prohibition in the USA, jam jars, also known as Mason Jars, were often used by people making moonshine to bottle their brews. Why? Because there was plenty of these jars lying around – people used them for pickling and storing different foods. Necessity dictated that these were the only suitable containers around for storing highly illegal moonshine. And because everyone had them, there was no way they would arouse suspicion.

With the absence of proper bottling plants, because the whole alcohol thing was illegal, moonshiners used the only suitable thing they had. And just like that, the jam jar drinking glasses trend was born and still exists to this day; a nod to the ol’ times when simply enjoying your favourite alcoholic drink could have landed you in jail. On the other hand, if you were an enterprising individual like the moonshiners were, you may also have struck it rich. The prohibition era was what you made it.

Nowadays the use of mason jars is found mostly in southern USA, where you will often find them in bars that have a more ‘rustic’ and old timey feel. The good news for us is that we can order these direct to our door at a bargain price!

£45.10
Added to wishlistRemoved from wishlist 3

£5.41
Added to wishlistRemoved from wishlist 0

£26.49
Added to wishlistRemoved from wishlist 0

CHECK IT OUT
Yuzo
About Us