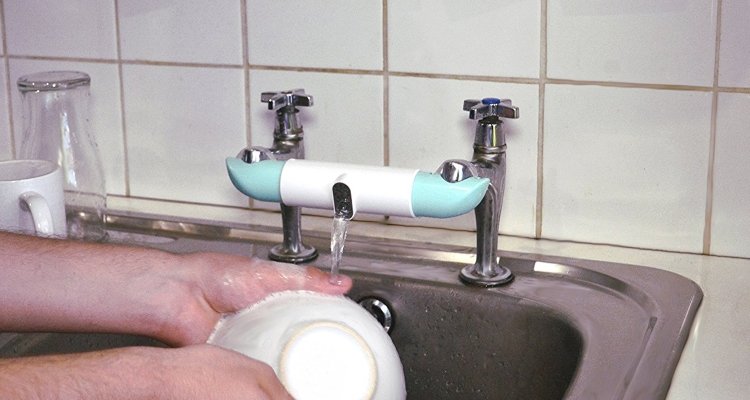 While most of the world has moved on to the more enlightened and practical mixer taps, British houses still stubbornly stick to archaic separate cold and hot water taps. Transform your cold and hot water streams into one skin-friendly stream by fitting a simple but effective adapter onto your taps.

Easily converts standard double taps into one mixer tap
Reduces water use by up to 50%
Now you have have hot, cold, or just gloriously warm water

Once upon a time somebody invented the tap, and when another genius hooked that tap up to hot and cold water pipes, running water came flowing into our houses in a way that could be turned on or off like a light switch.

If you stop and think about it, that was quite an impressive and life-changing invention! But also while you’re thinking about that, ponder this: why on earth are we Brits, generations later, still using that ancient system of separate cold and hot water taps when clever minds have already invented and used an upgraded mixer tap for years?

All too familiar is that grim choice of either sticking your hands under one stream of water so frigid you can just about feel your hands freezing into shards of ice, or another so hot the steam rises in clouds from your scalded skin as if from a bubbling volcano. Of course it’s always possible to try hopping from boiling to freezing and back again, but why bother with all that faff and burnt skin when a simple mixer tap could provide a steady stream of water at just the perfect temperature?

This adapter pops easily onto existing double taps and converts them into a nifty mixer tap. It’s made from rubber and can be adjusted to fit most standard taps, connecting them to provide one mixed flow of water at just the temperature you want. Easy to fit and requiring to tools to install, the adapter is the fantastically economical, practical and simple solution to the tap dilemma.

No expensive tap replacements or handymen needed – just a few simple steps and you’ll be welcoming a never-ending supply of warm water into your house.

£55.00
Added to wishlistRemoved from wishlist 3

£4.95
Added to wishlistRemoved from wishlist 0

£26.48
Added to wishlistRemoved from wishlist 0