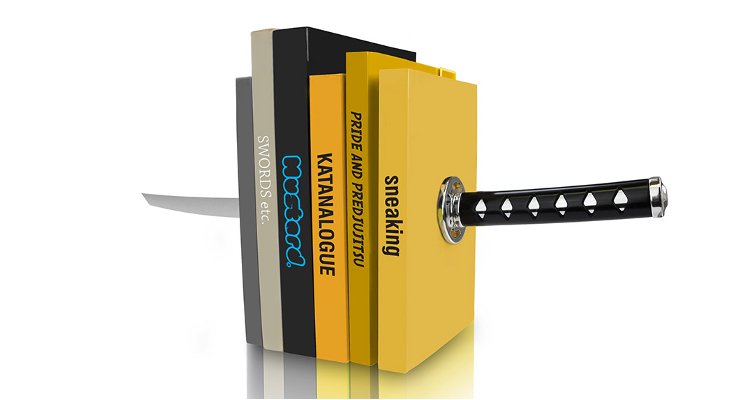 MUSTARD - Katana Bookends I Metal Bookends I Magnetic Bookends with Hidden Brackets I Bookends For Shelves I Unique Bookends...

Add some deadly beauty to the room
Eye-catching bookends for all your worthy (and unworthy) literature
Perfect for every cultured, well-versed warrior

Early Samurai warriors were incredible fighters more interested in the sword than the pen. After all, in the violent wars before the Edo period, what mattered most was gathering as many other warrior’s heads as possible while conveniently holding onto your own.

Once the Edo period started, however, and peace spread around the newly united country, the elite samurai class developed a keen appreciation for literature and the arts. One could not be a proper Samurai without being able to swing a sword and write a good poem, and so the way of the Samurai increasingly included a rich cultural education as well as a military one. Consequently, the Samurai aimed to live by both the pen and the sword. After all, who said you can’t have it all?

The good news is that those happy days of having it all aren’t over yet! Even lowly non-Samurai can lay claim to both the pen and the sword now, thanks to this sleek tribute to the Japanese warrior class. Keep your precious books and other works of cultured (or uncultured – we don’t judge) literature in disciplined, military order with a clean stab of a stunning silver blade.

This eye-catching Katana, or Samurai sword, actually consists of two separate, hidden metal bookends. A clever magnetic system allows the sword handle to attach to one end of a row books, CDs, or films, with the blade attaching to the other end. The result is a fascinating illusion of a stunning steel blade piercing your literature collection and keeping it all nicely together on the shelf for all to see.

Amazon.co.uk
Thumbs Up Ninja Mug, Black
CHECK IT OUT

£5.36
Added to wishlistRemoved from wishlist 0

£42.11
Added to wishlistRemoved from wishlist 1