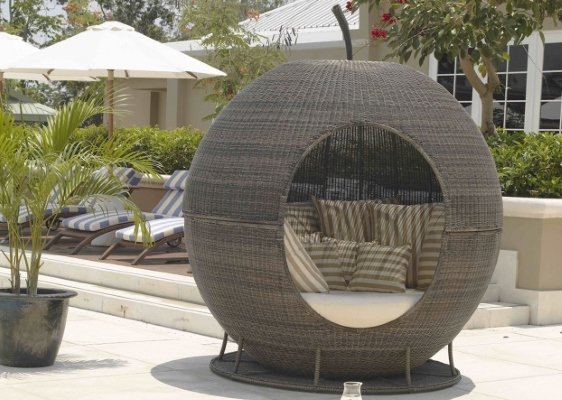 An apple a day keeps the doctor away, or so the old saying goes.

With this apple shaped garden bed the only reason you’re going to need a doctor is to check you’re in fact still alive as after spending the day in it, you’re going to be so relaxed, you’ll have more in common with the common tree sloth than other people relaxing in regular, non-fruit shaped loungers.

Whether sipping fruit based cocktails (an appletini or an apple collins perhaps) or just chilling out eating an apple in the sun, there’s no better place to do it than the Igloo Apple Day Bed.

The lounger boasts a bevy of resistances to, UV light, hot and cold temperatures, adverse weather, so you won’t have to worry about leaving it out in the garden, it’ll still be there for those hot summer days when you’re looking for somewhere to while away the hours – ideally somewhere shaped like a fruit.

Also boasting an uncanny resemblance to the Death Star, if fruit’s not your thing instead hatch evil plots to destroy the galaxy and crush the rebels from the home of the empire in your own back garden. Even pretend your dog is an ewok and through cushions at it from the safety of you garden paradise, though unassuming, they will play a vital role in bringing down the empire so take no chances!

£45.00
Added to wishlistRemoved from wishlist 0

Glow In The Dark Golf Balls