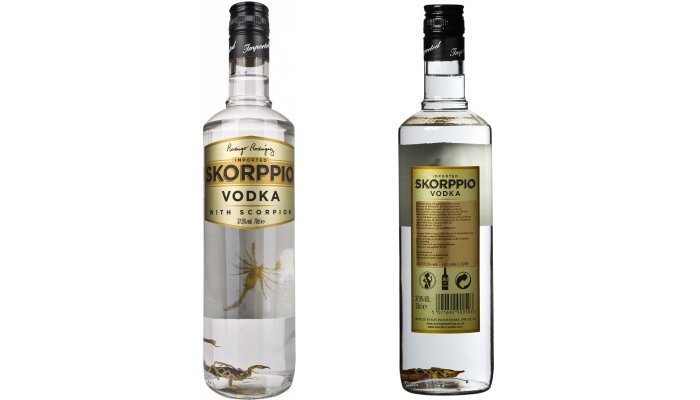 Everyone has a friend who likes a bit of competition. Whether it is friendly competition about who roasts the best leg of lamb, whose girlfriend earns more, or who drinks the toughest vodka, everyone has a mate they wish would just shut up about themselves. If you could find a way to end the dispute once and for all, you’d grab it and run with it! Well, if your mate happens to be obsessed with drinking more, harder, and faster than anyone else you know, we may just have the solution.

No matter how tough or impressive their vodka or worm-infused mezcal is, we guarantee this Scorpion Vodka is tougher. After all, what’s more deadly than a Scorpion? With their deadly poison gland, sharp and crunchy little pincers, and general air of menace, your tough-talking friend will turn into a fluffy little kitten when they set their eyes on this scary piece of work. You don’t need to tell him that this particular specimen has been specially bred in China just to be pickled in vodka, then carefully de-venomed, making it 100% edible….right down to the terrifying tail! Just challenge him to a drinking game, and watch his eyes water as the bottle empties….until someone has to eat the scorpion!! Tail, pincers, the lot!

This amazing Scorpion Vodka is also ideal for Stag nights; what groom doesn’t want to celebrate his pending nuptials by drinking a pint of vodka followed by a Scorpion chaser? It will be a night he’ll never forget, and if you get plenty of photos for Facebook, you’ll make sure no-one will ever let him forget it either! Crunching down a scary arachnid; now there’s something he’ll never miss about the single life. Just make sure he brushes his teeth well before the wedding, his bride will be less than impressed if he turns up at the chapel with little pincers stuck in his teeth!

Whether you’re a Vodka collector, a creepy crawly enthusiast, or looking for a unique gift for that special man in your life, this unique drop of booze will be sure to astonish. The creature inclusion apparently adds a certain flavour to the traditional Russian staple, lending a woody flavour and aroma, and taking the edge of the traditional Vodka bite. This one of a kind vodka is certain to surprise, whether you tuck it under the Christmas tree, present it at a Stag Party or 18th, or bring it out to bluff Mr Boastful, this Vodka will bring a taste of the exotic to any event!