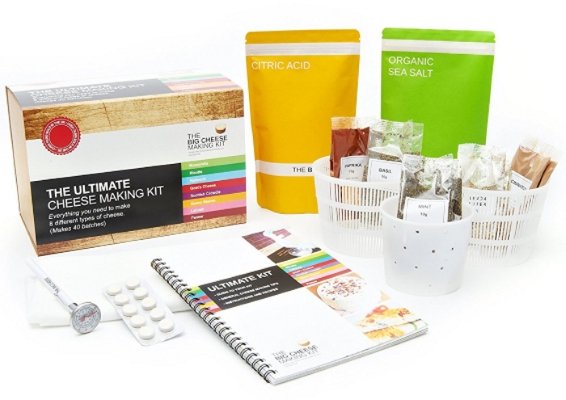 Did you know that historians and scientists are still to this day unsure about the precise origin of cheese? Archaeological studies have found evidence of the existence of cheese dating way back to 6000BC, and that it was made from cows’ and goats’ milk – not unlike it is today!

Cheese is a luxury for most people, with the majority opting to restrain themselves from consuming large quantities of the stuff for the sole reason that it contains a lot of saturated fat (not what you are after if you are trying to shed a few pounds to say the least). Consumed in small quantities, however, all kinds of cheese can have a whole host of health benefits that you might not be aware of. It has antibacterial properties, and can help prevent tooth decay by promoting the production of saliva in the mouth, and it is also an excellent source of protein and calcium.

With the Big Cheese Making Kit you can now make up to 8 varieties of your own cheese! Don’t worry, you don’t need a cow or a goat, and they certainly aren’t included in the box!

Amazon.co.uk
Make Your Own Halloumi Cheese Making Kit (makes 12 batches!)
£22.50
CHECK IT OUT

Tags: Gifts for MenGifts for Women

£10.99
Added to wishlistRemoved from wishlist 0

Grown Your Own Fuel Cell Kit